For Just A Moment

Time goes on, people touch and they're gone.... 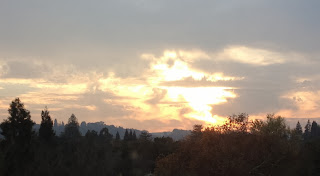 There was a hole in the sky tonight, as though a portal into another time.  It was golden rimmed in the hazy grey, much as we see the past in the midst of what lies in front of us.  The fall tones seem to have faded already as the blues settle in.


It was a winter day at the end of last year when a friend said to me "Let's see what the new year brings" after we'd shared a glorious morning that promised a horizon of good things.  There was a moment, a smile,  that flashed, as an icicle does in the rising sun.
Icicles that fall and pierce the skin, leaving a thin, cold trail of blood.
What followed was a year of loss, confusion, and searching for answers that had no questions.  Friends have been lost, some buried.  I have crashed, and been burned.  The scales have tipped and I've now forgotten more than I remember, but I remember that day.  It was something to hold on to.

What memories have survived now decorate a year gone by, like colorful ornaments; blue eyes here, brown there, green peering from around the corner.  Why is it the eyes I remember?  I work so hard to forget my own.


The summer came and went, a season of soaring highs and devastating lows.  My year continued to be one of rediscovery, recovery, and introspect.  I find it terribly disconcerting that so many chase my hidden smiles, then like a child who soon loses interest in a coveted Christmas toy, they leave me behind and take that supposedly disarming smile with them.
My husband tells me I always take on too much.  Too many tasks, too many people.  In doing so, I am bound for failure too often.  As people continually walk away, it is apparent that I am the common denominator.  I keep reaching out until it seems I find someone who will want to stay.


I've been accused of being ungrateful, insecure, psychologically unsound.  I am held up in comparison to the lives of others by people who don't understand that I'm not living anyone else's life; I'm trying to survive my own until it's time for me to lay down and rest.  In doing so, I don't rely on holidays to be thankful for people who touch my life, even if briefly.  I could be angry at those who go.  Where is the good in that?   An icy memory may stab the heart on a lonely night, but when it melts, it becomes water that nourishes.
There is one who brings more smile than hurt, more safety than fear, and has not left me.  I don't want to believe it's because I've crippled him, thereby keeping him at my side by default.  Instead I will fall asleep choosing to think he wants to be lying next to me, his hand resting on my back because it comforts him as much as it does me.  Because of this love, I am able to give to others the same.


I am also constantly needing to test its strength.
Let the holidays come and do their worst as I tremble in anxiety and wander the stores trying to look like I hadn't been crying for an hour at the thought of sitting at a cold family table wondering why I can't have the happy Thanksgiving so many wished for me.  What pulls me back to face another day is the realization that so many shared their warmth with me.  None tied by blood, but who hold me in higher regard.

I am thankful for this; the kindness of doctors who keep me in medication that can't be afforded despite my disinterest in their  life-prolonging effects.  The efforts of those who seek my smiles even when they abscond with them soon after.  The company of those who wish to give it.  That my work is now being recognized by many.  The knowledge that what I put forth into the world is what will be returned to me.  That a goodbye doesn't mean forever.


And the ability to see the rainbow that glimmers inside of an icicle.
Someday when we reminisce we'll say there wasn't too much we missed, and through the tears we'll smile when we recall we had it all, for just a moment....

Posted by Kymberlie ~ WriterOfTheStorm.com at 4:22 AM