Kymberlie Ingalls has a long history with words.  Writing came under duress as a student. She learned to spin stories about favorite celebrities, earning her comedic chops at a very young age by putting the characters in very precarious situations.  From there she found herself at the age of 14 desperately scribbling out sonnets for extra credit.  Now thinking everything had to have structure, she floundered throughout school trying to squeeze her chaotic mind into that box.


It wasn't until she won entry into a workshop at the age of 16 with an award winning poet that Kymberlie found her freedom.  Writing became more reason than rhyme, but it wasn't her passion;  more an extension of thinking, and breathing.  She was going to be an actor, not a writer!  When that ambition, and the notion of stand-up comedy failed, she fell back on her first love of radio broadcasting.  The writing continued in anonymity.


With her first blog appearing in 1997, she garnered a small following under an assumed name.  Kymberlie then moved into the exciting arena of short track stock car racing in 2003, creating a highly successful community website uniting fans with drivers through live updates, photo, video and commentary.  Her current network of blogs began in 2009, featuring genres of personal essay, memoir, opinion and short fiction, and collaboration with UK artist Kevin Goss.  She writes in themes of love, loss, humanity, and her struggles with amnesia, all from her little corner of the world.   A memoir novel is in progress. 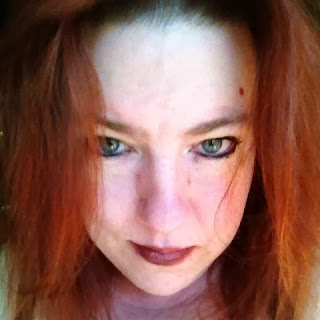