I can’t tell you where I’m goin’, not sure of where I’ve been.  I know I must keep travelin’ til my road comes to an end…
There is a price to be paid in living a life.

Last week I went for a train ride.  Alan asked me why.  “You don’t do trains.”  He is correct, I don’t do trains.
“
Personal challenge.” was my reply.  It was something I’d been slowly building to, an experience I wanted to share with my friend Laurent.  He and I share a fondness for trains – mine so long as I’m not on one – and now every time I hear the lonely whistle as they pass by each day, I think of him.  As opposite happens often in my life, we each hear that sound through different emotions.  The trains excite him and bring joy, whereas they leave me melancholy.

Laurent and I have spent time together walking in parks or downtowns, taking in the crisp fall air that soon gave way to bright tinsel and ornamented trees.  We have these long remarkable talks about love, food, philosophy and the state of the world.  He has filled a void in me at a time that I find myself losing friends again to death or to life or wherever it is that lost friends go.


I can’t help but wonder; just what is my addiction that I find myself in a constant state of recovery?

It’s been an isolated holiday season this year.  I haven’t had the heart to give to things I ordinarily do.  Charity and kindness has been a struggle – not because I feel callous but because I feel I’ve not much left to give.  A year ago, I nearly died.  Being allergic to the sun had caught up to me at last.  A seemingly benign blister beneath my breast contracted a deadly infection and it had to be carved out with a scalpel.  My life going forward will be a vulnerable one as I am apparently susceptible now to such things.
It was months to recover and I’m not all the way there yet.  In times of weakness, I tend to overcompensate.  To make up for missed work, I am now buried in a perpetually unfinished to do list.  My emotions swing one extreme to another as I strive to find balance.  I place myself at the foot of personal challenges because an uneasy step in a different direction is still less frightening than standing still.


As we boarded the train for an hour’s ride across the bay, I tried not to give in to my innocuous thoughts of train derailment.  I take a lot of chiding in regard to my dislike of planes and trains.  I am quoted statistics and levied with common sense while my control issues go unheard.  It isn’t about logic at all.  It is about the whirlwind that can at any moment become a tornado.  “Trains derail, you know.”  I said.  Laurent smiled at me, as if he had the superpower to keep it from happening.
It was on the way home that things went awry – my disabilities often have me feeling like an elephant in a cage.  Everyone else bounded up the narrow steps to the seats above while I stared in dismay and cursed my leg for failing me. One thing falls into another and my embarrassment triggered my anxiety of being in such close quarters with too many strangers with no means of escape.  I survived the return but now Laurent had seen a side of me that I wasn’t ready to show.  But it was an experience that I wanted to share with him.  It seems that’s how this friendship has gone from the beginning.  I can’t undo it, so best to embrace it and move on.


I’ve been noticing a slow increase in my sun blisters.  Remnants of the adventures and talks and struggling to walk because sitting is for sissies.  Sometimes I have the strong need to just be normal.  I watch the scars multiply and hold at bay the paranoia that any one of them could become deadly in any moment, which is silly because their visibility shows everyone just how abnormal I really am.
Last night I couldn’t sleep as I felt in the dark at the beginnings of a blister beneath my breast.  I called my husband in to look, the graveness in his eyes reflected my own words.  “I’m scared.”


This morning I woke up to the headline that a passenger train with 75 passengers had derailed on to a busy freeway.  “But I could show you the statistics…” Laurent replied in a text when I linked him the story.
"Not so much the point.” I sighed.


There is a price to be paid in living a life, with metaphorical coins to pay our fare.  Do I sit alone and not venture into the world?  Or live each day without the fear of what could kill me?  We think of all the ways we might go but it’s often the unexpected that claims us in the end.
Life has its toll, and sometimes it derails.  We need to climb on board anyway because it’s the only way to get anywhere.


Like a poor wayfaring stranger that they speak about in song I’m just a weary pilgrim trying to find what feels like home.

Posted by Kymberlie ~ WriterOfTheStorm.com at 10:49 PM No comments:

Celebrating an anniversary of my life was a daunting prospect when a month prior my doctor had put me at death’s door.  Many handed me the gift-wrapped rhetoric of “you’ve survived!” and “this year will be better!”  I have learned to smile politely and say the things that people are looking to hear.

There are some things I have learned since blowing out the candles of my last birthday cake.  I’ve learned how to die with both fear and grace.  I have found my old sense of humor that had seemingly gone astray.  I have realized the best thing I can do at times is to not say anything at all.

And I have at last found my worth.

People always ask “why do you write?” and I never have a fully formed answer.  I’ve often felt inferior in the face of other writers who have glorious imaginations or intense passions for the written word.  For me, it’s always been about having a conversation with myself.  More recently, I’ve been working on a series of short fiction stories that tie in with my music obsession.  But you see, I’m a writer of little imagination.  Too often I am grounded in reality and despite the dark clouds that hover over me, I rather like it that way.  Telling the very real tales that are universal yet uniquely different – it leaves me feeling that I have a place in what is a very large world.

Of course, it’s easy to delude myself into thinking that what I’m doing, I’m doing very well.  I believe people when they tell me as much, but I almost wish that just once someone would tell me I’m terrible at what I do and that I should drop my pen before I truly poison someone with it.  Perhaps then I’d feel as though I’ve arrived.

It came about that this year on my 46th birthday, I would be spending it in the company of two women, one whom I admired very much and the other who was more well known in the literary world than I’ll ever be.  I was to be presenting them at a lecture later in the evening.  Being an extremely shy person by nature, I spent weeks wondering what would I talk to these two authors about.  Being a bestseller?  Writing award-winning work?  Having my words acted out before thousands?  That’s all about them, not about me.  I wanted to ask advice, to walk away with more knowledge and instead, I walked away with an experience that held a magic I hadn’t expected.

I’ve met many celebrities in my time.  Some pretty impressive names.  This evening, however, on the 9thday of August, I did not have dinner with two well known authors.  I shared a meal with two best friends who welcomed me into their world for an evening.  They laughed and displayed a familiarity with each other that I envied.  I’ve lost many friends as of late and being on the fringes of such a relationship made me miss having that in my own life.

Victoria and Anne have only known each other for just a few years but sometimes instant connections quickly make up for a lifetime.  They mothered over me as I picked at my macaroni and cheese, but I was more interested in the conversation swirling around me.  They talked of how they’d met, chuckled over shopping excursions, told of how they collaborated and didn’t hold back on each other’s bad habits.  There was no pretense, no politeness, only an authentic affection for each other and even for me too.  Victoria has enchanted me from the time we first met with her talent and energy.  As I spoke to them both, I related my own stories of edits and creations and inspiration.  Then we talked of personal issues such as family and childhoods the state of the nation today.  I was privy to not only what made these two women successful, but what made them human. While our experiences were different from each other’s, there was a universal bond and I thought, I belong here.

And I felt my worth.

It was at the end when the birthday brownie arrived at the table, complete with a candle to make a wish on, that I truly sensed a kinship.  They could have simply said “Happy birthday” upon learning of the day, but Anne and Victoria took the extra step to make it special.  Such a simple act left this old girl still believing that good does exist in this war-torn world. 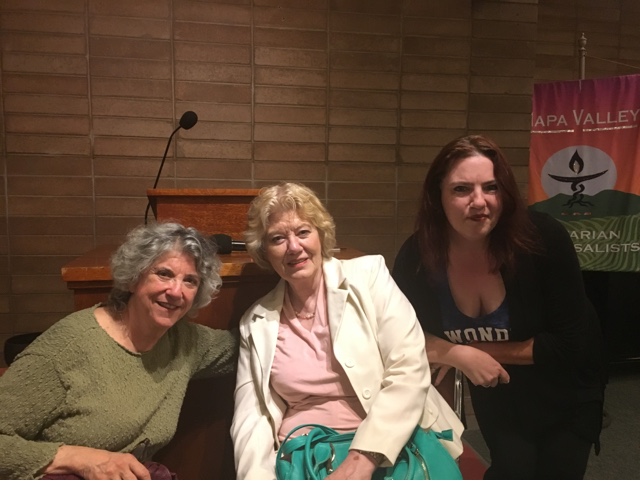 Posted by Kymberlie ~ WriterOfTheStorm.com at 9:02 PM No comments: